We Ask Our Booksellers: What's Your Favourite Book?

This week, we ask our lovely booksellers about the books which have left an impression on them.

I was sat on a beach in Croatia with all my worldy belongings in a rucksack beside me when I began to read Captain Corelli's Mandolin.

It seems to be a book that evokes either a love or a hatred for the story, especially with 'that unexpected ending' and I strongly believe the situation you find yourself reading books changes the way you receive them. I was tired, sunburnt, on my own, rather aptly along the Dalmatian coast and had 12 hours to fill before my ferry left.
This book is a depiction of Southern Europe and the day to day life on a small Greek Island throughout WWII. What struck me was the struggle of the enormity of the situation of war and the smaller things in life. How, for some inexplicable reason, the men's club rules staying the same despite being bombed daily almost matters more than the war itself. Pelagia, the feisty and unwavering heroine, had me both shouting at her for her choices and then feeling her pain within the same chapter. She is one of my favourite female characters, and her story like so many untold stories from the Second World War is both inspiring and heartbreaking.
Captain Corelli's Mandolin is not an easy-going book or a 'light-read' but I would say that is portrays an uplifting and hopeful side of humanity that exists no matter how dark the times may be. I cannot classify it into a genre but instead say that it is an honest portrayal of life: it will make you happy, sad and everything else in-between.
And when I reached the end, I turned back to the start and read it all over again.
Emma Bilsborough - Retail Team Leader

I read this book when I was 17 and in college, coming to terms with changing friendships and having to make decisions about my future. The timing may have contributed to my love for this story, it put a lot of my teenage problems into perspective. I love a book that you can see yourself reflected in - and this does that perfectly for me.

I had always loved reading, since I was little, and at this point in my life I was deep into reading Young Adult fiction, so One Day really made me up my reading game. I can’t even remember how I came to read it, its most likely that I borrowed it from my mum, an avid reader like myself. All I know is that after reading it, I immediately bought all of the other books available by David Nicholls. I love the way he writes, and I adore his characters, even when I want to hate them. Dexter Mayhew, the male protagonist in One Day, spent the majority of the story driving me mad, but I desperately wanted to read and reread every word about him.

The story is incredibly funny, and had me laughing out loud, but it was also very bittersweet and had me crying on its pages at many points. Though this book is fantastic because of the writing style and complex characters, the reason it is my favourite is because it helps me mark an important time in my life, and because it made my love for books increase tenfold. 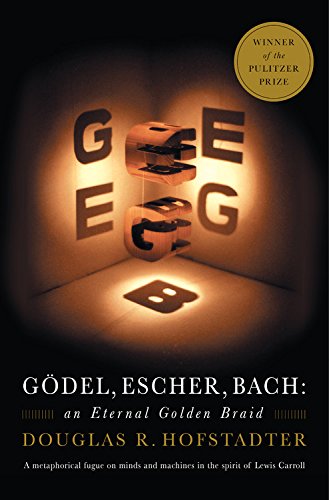 I was in between degrees, universities, and (somewhat fittingly) selves when I first read this book. It has profoundly shaped the way I think and, ultimately, the way I am, in ways with which I am still coming to terms.
Having decided to give up on a film production course for a philosophy degree instead, I started reading up on the subject to get a feel for what areas I wished to specialise in. I had worked my way through the usual suspects found on philosophy reading lists like Plato and Rawls, and wanted to try something different. I had heard that GEB was a difficult book on a difficult subject (namely, the nature of consciousness) and in the youthful arrogance of an undergraduate I wanted to prove my intellect, so I dived right in to all seven hundred and seventy seven pages with relish.
It was unlike, and is still unlike, any book, I have ever read. It essentially argues that consciousness is an emergent phenomena that develops out of a system of meaningless parts through recursive feedback to create meaning - to wit, a self. 'Difficult' doesn't quite do it justice, and I confess that I don't understand everything in the book, but the journey of reading it is worth the confusion and headaches. Hofstadter fluctuates between prose chapters making use of mathematics, music, biology, computer science, zen Buddhism and other subjects to outline his theory and chapters written as Lewis Carroll-style dialogues that illustrate the ideas through narrative, wordplay and structural puns.
Filled with fascinating ideas, humour and incredible feats of both scholarship and wordplay (one of the dialogues, involving a genie discussing various liquids and types of musical notes, is titled 'Djin and Tonic'), it is more than worth your time, as ultimately it is all about 'you', and what that actually means.

I was working at Bath Waterstones when A Girl Is A Half-formed Thing was published and I remember it catching my eye as I restocked the fiction shelves. This was during a time when I read constantly, always encouraged by my good friend and fellow bookseller/lover Eddie. We would have endless conversations about new writers and old....and working at Waterstones proved the perfect outlet for my reading addiction!

I bought the book and had it for a couple of months before I got round to reading it. But then I couldn't stop. I read the whole book in one sitting on Boxing Day 2013 and, though it sounds dramatic, it changed the way I think about literature! McBride's writing style is very unique. The best way to describe it is a splurge of words which represent each character's thoughts in real time, before they've had chance to edit them. The result is pretty stunning. The book was adapted for the stage and first performed as a one-woman show in 2015, which I was lucky enough to see at the Tobacco Factory in Bristol.

Of all the books I've read so far (a fairly reasonable amount), I can honestly say this one changed my life, and as a result I'm strongly attached to it!

You can learn more about our team, the company and the way we work here.

We Are Proud To Be Participating In The Great Bath Feast 2017!Friday, 8th of September 2017

We are excited to announce that this year Bookbarn's Full Stop Cafe will be part of The Great Bath Feast. This autumn we are coming together with businesses all over Bath and the surrounding area to give locals and visitors the chance to taste new flavours