"How I Live" by William Pryor

Bookbarn chairman, William Pryor, invites you to get to know him a little better in this week's blog post. 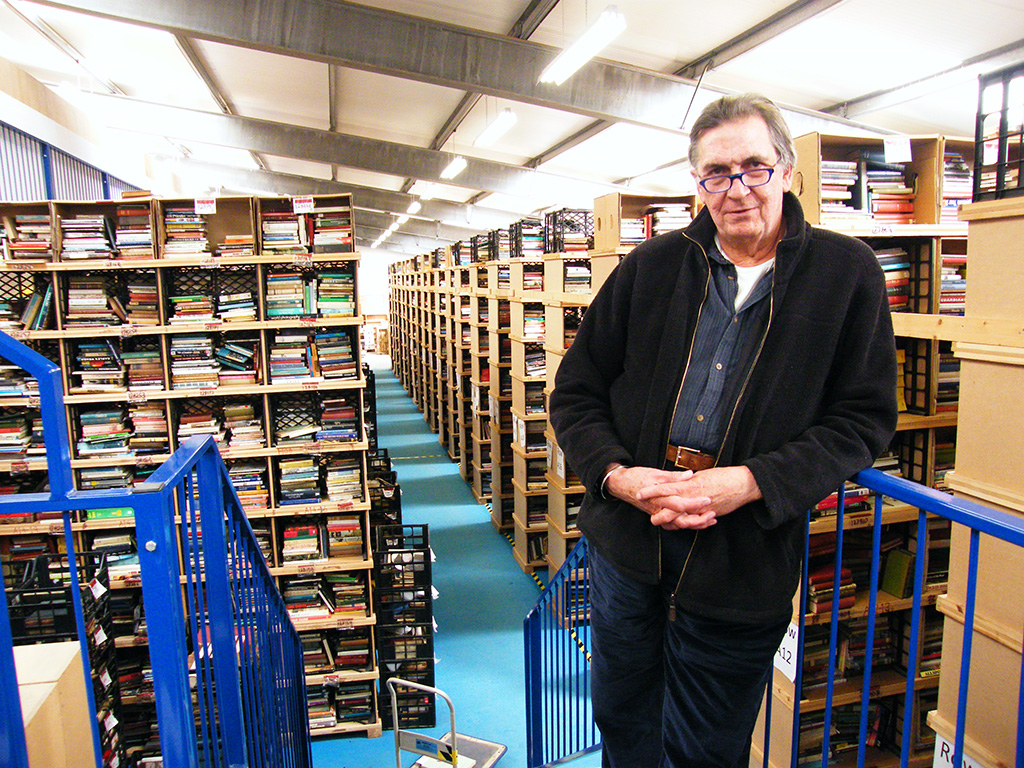 I was once an early adopter - I loved newness, its burgeoning and excitement; the creative aspect of Brahmic change. And this even with the inevitable stasis and decay that follow. I still cherish the rush of the new but now am immersed, not quite drowned, in the archaic that is second-hand and antiquarian books; an immersion made possible by applying the cutting-edge technology of the internet with the age-old technology of the book.

I am chairman of Bookbarn International, that sells hundreds of thousands of used books all round the world through 20 different online marketplaces. It's Bookbarn International because we store our 750,000 books in an old warehouse, a barn, some ten miles south of Bristol in Hallatrow. Books first meet our technology when they are catalogued and tucked up on a nice clean shelf awaiting a customer anywhere from Abbots Combe to Zeal Monachorum, from Aichi in Japan to Zzyzx in California. Our clever, dynamic pricing algorithms are applied to keep our books competitive. Since for 90% of our stock we only have on copy, when a book is sold, its data has to be removed from all of the other platforms within minutes, to avoid our selling a book we no longer have in stock.

Bookbarn is a circular business in that our approaching £2 million revenue comes from putting old books back into the circle of use; we are recyclers on a grand scale. We have found ourselves selling books that we have sold twice before! Though we are not a town as such, we have recently been told we can join the International Organisation of Book Towns that has 15 members around the world. The recently departed Richard Booth started it all in the sixties when he declared himself King of Hay-on-Wye. At its peak, there were more than 20 bookshops in the town, which has a population of less than 2,000.

The other 14 book towns are mostly in small, rural communities whose economies are struggling. Books have a powerful magnetic effect; no one likes to throw them away and the opportunity to browse through hundreds of thousands of them makes for a day-out destination, a fun staycation activity. Bookbarn is in the parish of Hallatrow, an area of Somerset whose main economic activity was, until the fifties, surprisingly, coal mining. The slag heaps, the purpose-built now-derelict railway and the rows of miners' terraced houses are still visible. And tourism, specifically book tourism, has been proven to apply a powerful tonic to otherwise dying communities, so we are applying that formula to the Bookbarn with its feted Full Stop Café, bargain bookshop and Darwin Rare Books Room.

But I digress. Let me get the name-dropping over with: I am a great, great grandson of Charles Darwin. His granddaughter, my grandmother Gwen Raverat, was the renowned wood-engraver, writer and painter, whose childhood memoir Period Piece was published in 1952 by Faber, and is still in print sixty-seven years later, now in three different editions.

About having a god of science as a grandparent, she writes: The faint flavour of the ghost of my grandfather hung in a friendly way about the whole place, house, garden and all [she refers to Down House, Darwin’s home in Kent, now managed by English Heritage].

Of course, we always felt embarrassed if our grandfather were mentioned, just as we did if God were spoken of. In fact, he was obviously in the same category as God and Father Christmas. Only, with our grandfather, we also felt, modestly, that we ought to disclaim any virtue of our own in having produced him. Of course, it was very much to our credit, really, to own such a grandfather; but one mustn't be proud, or show off about it; so we blushed and were embarrassed and changed the subject. It was probably the same wish not to seem presumptuous, which gave my uncles the odd habit of never claiming him as their own father, in conversation with each other. They always said: ‘Your father said so-and-so’; to which the other uncle often answered: ‘Well he was your father, too.’ Sometimes stupid people even made jokes about our being descended from monkeys! This annoyed us very much. We thought it in bad taste.

But I haven't thought it in bad taste, ever ready to trot out the D word to gather looks of awe. Which is a pity, because it doesn't work. This awe fishing, it is a screen, masking my reality. "Oh really," they say, "Gosh, Darwin!" they snap. And there the conversation ends.

But stop rambling, Pryor! How do I live now? With 74 years of being human to varying degrees behind me, I am still no more than 19 inside. I have been in the book trade most of the last 52 years: writer, publisher, editor, bookseller and now owner of 750,000 second-hand books. I was once a junkie - yes, a full-blown, heroin and cocaine injecting junkie who got his supplies on the NHS (this was in the sixties, when the attitude to addiction was very different in its tolerance). Let me quickly add that I got clean in 1975, which is a long time ago. Nothing worse than headache pills and coffee since, honest.

I've been a vegetarian for 50 years, a devotee of minimalist music from the likes of Terry Riley and Steve Reich, a poet and stager of happenings - you have to agree that I am, what with my recycling of attitudes and zeitgeists, a proto-hipster, albeit an unbearded one! The recent surge in veganism and associated health and social ideas had their precursors in the sixties with the beatniks (I owned the obligatory duffel coat and counted Jean Paul Belmondo, John Coltrane and Samuel Beckett as heroes). And then the hip sixties had their forerunners in the early 20th Century - my grandmother was a part of Rupert Brooke's Neo-Pagan group who believed in skinny dipping, free-ish love, art and letter writing.

I could also add that my peer group in Cambridge where I grew up (my father was an entomologist and tutor at Trinity) boasted Syd Barrett and David Gilmour as members. I could, but I won't.

How I live, day to day, is determined by the demands made by Bookbarn, by the archive of my grandmother's amazing wood-engraving prints - The Raverat Archive, by the development of a TV series adaptation from her charming book (Period Piece), by my recent diagnosis with Parkinson's Disease and by the spiritual practise I attempt to follow. In reverse order. I say "demands" because that seems to me the central role of time and space - we are pulled and pushed out there, in time and space, but the centre of us is silent, unmoving and wise.

I went to my guru with the problem that my Parkinson's right hand will not stop its shaking, making meditation even more difficult than it has been all these years. He suggested that I should be practical and know that this shaking is just the body, it is not me, it is not the thing that thinks, let alone transcends illusion. I am not a human being searching for a spiritual existence, but a spiritual being going through the human experience of getting old (to adapt Pierre Teilhard de Chardin's dictum). Any darkness is simply the absence of light, of concentration; any death simply the lack of so-called life when the being-ness departs. To know what I really am, all I have to do is concentrate. It's so simple a child can do it; but our adult existence is so complex and scattered, we need help to rediscover the silence.

Still waffling, Pryor? How do I live? Day to day? I spend (interesting use of the word) a lot of time (not only do you spend money, but also time and space) in my double glazed garden office that gives me a captivating view of the river Avon, of the back of a Georgian street in Bath, of the buzzards that nest nearby. What do I do here? I work on the issues that Bookbarn goes through. I write some poetry, some prose. I transcribe letters I have researched in Cambridge and London, letters between my grandparents and their cousins and Neo-Pagan and Bloomsbury chums: Rupert Brooke, Ralph Vaughan Williams, Frances Cornford, Maynard Keynes, the Olivier sisters, and on and endlessly on. These people wrote letters as often as people whatsapp nowadays, but usually much more interestingly.

So, another attempt at answering the question, how do I live: quietly, watching the autumn, wondering how on earth and in heaven did I get so old without noticing. It's been a long, slow failure - thank God - as Beckett wrote: Fail, fail again, fail better.

We Are Now Taking Bookings For Our Second Winter Fayre!Friday, 15th of September 2017

Following the phenomenal success of our first ever Winter Fayre last year, we are pleased to announce we will be holding another this year on Thursday 30th November. Stalls were snapped up early last year and as we have limited spaces, we would advise booking